Dutch metallers Delain have successfully dropped their brand new apocalyptic album “Apocalypse & Chill” just a few days ago. For this occasion, we arranged a short talk with Delain vocalist Charlotte Wessels and keyboardist Martjin Westerholt to find out a little bit more about their new explosive material. Read what they had to say about the music and themes on the album, video shoots, love songs and more below.

MG: Your new album “Apocalypse & Chill” is finally out and it seems you’ve experimented with vocal lines a lot. You tried some new styles, such as harsh vocals and the lead vocals of your guitar player Timo. Was it intentional or just evolved naturally?

Charlotte: We didn’t plan it like “Hey, we should add Timo’s vocals on this record!”, but Timo, actually, started getting more into the writing process. Before, he did more arranging, but not so much songwriting. And on this album, “One Second” was one of the songs that he presented. In this song, he was singing himself and it sounded so cool that we thought there is no reason to replace all of that. A lot of the other changes in vocals also went like that, guided by the music and what the song needed. It was a lot of fun to play around with it!

MG: That’s great, actually! The cover art of the upcoming album has a totally different style than your previous works. Even the title is rather controversial. Why did you decide to change the style?

Charlotte: It just fits the title very well. It came from the brainstorming session when we were deciding about the title and we had some idea about Photoshop. We’ve tried around 20 different ideas, including some that were closer to our original style, but this image, the lady lying with the world on fire in the background reflecting in her sunglasses… It just translated the theme of “Apocalypse & Chill” very well. 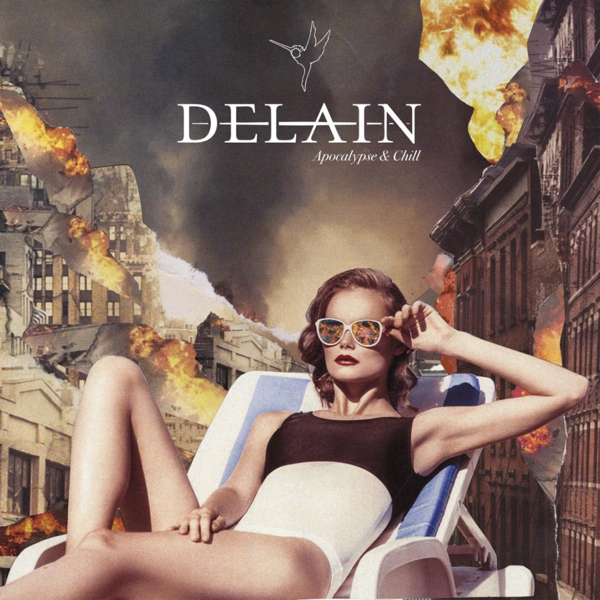 Martijn: By the way, I don’t regard the title as controversial. The fact is, when you turn on the TV or look through a newspaper, you feel that the world is literally on fire. You know, things in Australia, in California… But, at the same time, when you use social media, you see everybody living their “perfect” life with “perfect” photos. You know, there’s a really big contrast, we live in both parts of this world. “Apocalypse & Chill” fits it really well.

Charlotte: Yes, the idea came from this contrast and it’s visible even in music. I mean, there are apocalyptic songs, there are love songs. It feels like a kind of mirror to what happens when you open media nowadays. We also wanted to play with words on “Netflix & chill”, which is also very 2019, very current in that way [chuckles]. It is, maybe, a little bit more controversial in the sense that it is. We usually had more romantic titles, which I also really love, but I don’t think that one should exclude another.

MG: Compared to your previous works, how did your sound evolve on that record? What would you say is the biggest difference or something completely new and unexpected on “Apocalypse & Chill”?

Martijn: It’s funny to think about it because I see it as just a little bit more intense and diverse. We’ve always had some electronic influences and orchestral sounds. But this time we have maybe more both electronic elements and orchestral ones. What also makes it more intense is the guitars. It’s mixed the other way. We worked with a different mixing engineer. There’s heavier guitar riffing, more orchestral parts going on… This is how I experience it.

MG: You’ve filmed amazing music videos for this album so far. You’ve created amazing stories and travelled to such beautiful places as Snowdonia to capture and bring these images to life… How important is this aspect of music for you? Is it just something that needs to be done or do you enjoy the creating and shooting process?

Charlotte: Huh! It’s something that has to be done and we enjoy the process, as well. I must admit, I always get really nervous for video shoots, I don’t know what it is. Photoshoots are getting a bit easier for me. So enjoying is not, actually, the word for me. I like the creative concept of it, but I never sleep the night before or the night after. Actually, the most “relaxed” video we’ve done so far is the new one, “Ghost House Heart”. We’ve had a lot of fun doing it!

Martijn: Absolutely! I also think it was the funniest one we’ve ever done.

Charlotte: But others are great too! Snowdonia, this epic nature…

MG: And what does the process of making videos for Delain look like? What’s actually the first step? Who comes up with the ideas? Do you perhaps see some images in your head already when you’re writing lyrics or music?

Martijn: Well, first we choose the song itself, and it’s Charlotte and me going over the material. We also ask guys in the band what do they think. Then we talk about it with the record label and our manager. This time, I think everybody immediately had the same choice. The next thing is to find video partners. This time, we did all four videos with the same company, they’re based in the UK. In the past, we had the script offered to us, and many times I found these scripts silly, even difficult to read [laughs]! But this time with those guys, there was some real chemistry, we kinda “ping-ponged” with ideas!

Charlotte: Yeah, in the past we usually just sent a song with the lyrics and the main theme of the song, if it’s not clear from the lyrics. But I think we did get a lot of treatments like Martijn said: “How did you get THAT out of this song?”. I don’t know when we changed that, but I guess before “Moonbathers” we started discussing it more, about what if we add more backgrounds or this or that… Even then, it’s still difficult, because some companies just said: “Okay,”. That’s also disappointing because you want them to take your ideas to a higher level. The company we work with now has a really cool balance. We communicate, we tell them our thoughts, and then they look at it through their experience and it becomes better.

MG: That’s interesting, actually! Moving on to lyrics, the themes of betrayal and broken heart occur in your songs very often. But as we all know, Charlotte you are happily married. Where do these dark aspects of love come from? What inspires the bitter words you write? Books or movies, perhaps?

Charlotte: Yes, a lot of our songs are not classical love songs. I would say when you experience love in a strong way, it becomes easier to imagine what if things go wrong. What if we break up after this? What if our relations end like many relationships ended before…? So I don’t find it hard at all to write about those kinds of things just because I am in a long-term relationship. It always provokes fear what if it ever goes wrong. It’s very real, I am really scared. There’s no need for any inspiration from outside.

MG: Last year, Merel Bechtold left Delain to focus on other projects of hers. What I always loved about your live shows was the insane chemistry you girls had. The smiles, the jokes…  Do you sometimes miss that on stage? Do you keep in touch with her?

Charlotte: Yeah, but I think for the band and for her it’s the best the way it is. We speak to each other, so I think it’s better for her that she can really create what she wants to, which we totally respect. We had a very friendly split.

Martijn: It can be like that sometimes that you join each other’s journey, but then part ways. You shake hands, wish each other the best and I think it’s a beautiful way of doing it. Everybody gives something to the other one while working together. You learn from that and it can be really good!

MG: What are your touring plans after releasing the album? What about festivals this summer? Where can we catch you?

Martijn: Now, we are still busy planning more tours in autumn and, of course, we are playing in the UK, in Utrecht, Finland and we have festivals coming. There are definitely more shows coming!

MG: What helps you to stay in shape, to survive so many concerts in a row?

Charlotte: Yeah, that’s probably the most underestimated one!

MG: Definitely! Would you like to add anything, to spread some message to our readers?

Martijn: Well, first of all, thanks for taking the time to read this interview, for their interest, and for their support. In every interview, I say how lucky we are to have such a loyal fan base. I think it’s quite unique and we should really cherish that, without them we couldn’t have done all that.

Keep in touch with Delain