The independently-released debut is a collaboration with Rocky Gray (ex-Evanescence, We Are the Fallen) . The 11-track album describes itself as “Ethereal Gothic Rock”, and is due out in the Fall of this year.

Cradle of Filth keyboardist and songstress Lindsay Schoolcraft has spent most of this year touring the world, performing Cradle’s “Cryptoriana” set (in addition to their 20-year re-release of “Cruelty and the Beast”) everywhere from Peru to Russia.  Despite this hectic schedule, she has somehow managed to work on multiple collaborations, including classical/black metal project Antiqva and her newly announced solo album, “Martyr”.

Read our exclusive interview with Lindsay Schoolcraft  from earlier this year. 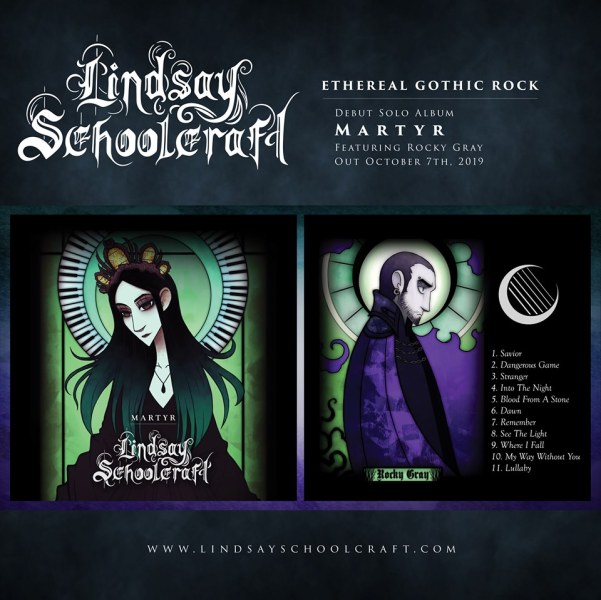 In a Facebook post published Monday, Schoolcraft announced the debut would be released October 7th, 2019. In another blurb on her website, she revealed several artists who lent their creative chops to the effort, including Antiqva co-creator Xenoyr.

“This album tells the tale of finding beauty in darkness, with Lindsay Schoolcraft on lead vocals, piano, and harp. Rocky Gray lends his signature sound on guitar, bass, and drums and together they combined their composing efforts to create ethereal atmospheres with their hard rock and nu-metal influences. Gutteral vocalist Xenoyr of Ne Obliviscaris joins them on the track “See The Light” and filmscore composer Spencer Creaghan added the Symphonic element.”

See the full tracklist for “Martyr” below:

In an earlier post, Schoolcraft took the opportunity to dispel rumors that she was leaving Cradle of Filth.

“I’m still going to be at the shows in the next few months,” she says in a video posted to her Youtube channel. “I’m not leaving the band. If I were to leave the band, there would be a clear post that says, ‘Hey, I’m leaving the band.’ But that’s not happening.”

Cradle of Filth are scheduled to play the following shows through the end of this year: