Since I have started going to concerts, I always tried to exchange some words with the musicians after the show. The only condition that needed to be fulfilled was that they come out after the show to connect with their fans. Mostly, they did. Sometimes it was just the standard chitchat the musicians are used to but sometimes it was much more than that. A comparatively deep-going conversation. And as I already had some experience with getting in touch with band members I wasn’t too nervous when I drove to Erfurt, Germany, to see a show of the Female Metal Voices Tour 2019 at the club „From Hell“ on December 4th. But this wasn’t going to be just another show where I would try to catch the artists after the show. I had an appointment with no other person than Emmanuelle Zoldan, lead vocalist of Sirenia. Luckily for you, you can read our talk below.

MG: How old have you been when you discovered your love for classical music and metal? And what genre came first?

Emmanuelle: To be honest, metal for me came really late because at first, I began with rock music with first bands. After that, I came to classical music. Accidentally, totally. And I had to focus my career on classical [music] but it was not expected at all. I just came to the conservatory to have some vocal coaching and that’s how I began classical music. But it was not classical music that I was looking for in the first place. And I went to metal much later because I have been invited to participate in several metal albums. So it was… maybe 9 years? 8 or 9 years ago. So kind of recent.

MG: When did you decide to become a professional musician?

Emmanuelle: Really early when I was a child. I have a father who is a musician.

Emmanuelle: Yes, of course. So for me, it was obvious that I had to do something with stage performance. I didn’t know if it would be music or theatre but it was the stage for sure.

MG: What are the differences and similarities between audiences in classical music and metal?

Emmanuelle: It is totally different. The first thing is in classical music you never see people standing up in the audience. Shouting or singing with you. It never happens.

Emmanuelle: No! No headbanging. Although I’d love to see that in opera. Unfortunately, it doesn’t happen. So that is the first thing. And we don’t feel the same warmth coming from the audience in classical music. It is…

MG: Do you sometimes see metal people joining opera audiences or the other way around?

Emmanuelle: Oh, I think there are more metal people coming to classical music, than the other way around.

MG: That could be a matter of age, sometimes?

MG: The techniques you use in opera and metal differ in many aspects. While metal is more about freedom, you need to follow exact rules in opera. What is more important to you? Being free and spontaneous or following the given script on stage?

Emmanuelle: Of course freedom. I think when you’re focusing on the technique and this kind of thing, you are losing something of your soul, you know? So for me, it is very important. It is also true in classical music, even if you are in a technical way of things, you also have to find the freedom in doing it. It is very, very important.

MG: So you can put more of yourself into your performance?

Emmanuelle: Yes. Of course. And at the same time in metal music, you don’t have this [thing] of being exactly, you know, totally faithful with the score like it is in classical music. So it is the kind of freedom I like more because you can do different things every night, you can make some improvisations. That makes the whole thing more interesting also. That is something that is totally forbidden in classical music.

MG: How did your colleagues from opera react, when they first found out you’re also in a metal band?

Emmanuelle: Ah, that is a very good question. It took me some time to accept doing metal as I do now as a lead singer. Because if Morten had asked me to become the lead singer in 2003, it would have been really complicated for me because it was the beginning of my classical career. And in classical [music] it is very complicated to make people understand that you can do different things. You know, it is a very straightforward way of thinking. But after some years, I had enough experience and I felt free enough to make the decisions to do whatever I want. And whatever people can think about it. I probably lost some contracts because of it.

MG: That is really a pitty!

Emmanuelle: Yes! That’s true because a lot of people in classical music cannot accept that you do this kind of „impure“ music, you know? [laughs]

MG: You could call this narrowminded.

Emmanuelle: Yes! Yes, but a lot of my personal friends were very happy because they know me and they always knew that I love to do different things and challenges in music. So finally, they were not so surprised about this choice.

MG: If you had to choose one classical piece to cover in Sirenia style, which one would it be?

Emmanuelle: Ah, that’s very interesting. Probably Tschaikovsky music. He is one of my favourite composers and I think he is somehow close to metal music in some way. I don’t know, maybe… Jeanne d’Arc, Maid of Oréans. I think there is really some metal inspiration in this.

MG: Sometimes I get the impression that several metal songs are inspired by classical music.

MG: Sometimes I listen to classical music as well. Beethoven, Bach, stuff like that.

Emmanuelle: And you can easily imagine how it should sound in a metal way?

MG: Sometimes, yes. Before you became the main vocalist of Sirenia you were in the Sirenian Choir for several years. How did you get in touch with Sirenia in the first place?

Emmanuelle: I was finishing my studies at the conservatory in Marseilles and Sirenia was recording their albums in Marseilles. And they needed some singers for the choir. The conservatory was in contact with Thierry, the owner of the studio, and he called me if I was ok to record some choirs. So I did that for Sirenia but also for Turisas, Trail of Tears, Penumbra and some other metal bands. And then he called me again for every album.

MG: Pretty nice and interesting to see how such nice things can develop out of such coincidences. 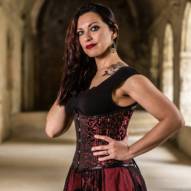 MG: Occasionally you sing French. What meaning has it to you to perform in your native language and what language do you prefer to sing in?

Emmanuelle: I like to sing in French of course because it is my native language. And I think it is a beautiful language. But to be totally honest, I love the music of the English language more.

MG:  So the tendency is a little bit more towards English?

MG: Sirenia lyrics are generally very dark, gloomy, dealing with existence and mental state. People might think you’re sad and depressed all the time. [Emma had to laugh a little at this point]. What kind of personality do you have and how do you cope with all the darkness that radiates from the songs?

Emmanuelle: Ah, the thing is, I am not responsible for this. Morten is writing the songs. He just asked me to write some French lyrics on the last album, but…

Emmanuelle: Thank you. But I think you probably should ask him.

MG: You are three nationalities in the band now. French, Norwegian and English. How do you get along? Do you see any cultural differences and approach to music?

Emmanuelle: I am not sure. I think… erm, or what I feel inside, we are all looking in the same direction. That’s what is interesting. I think we all have more or less the same kind of inspiration.

MG: So the most important thing is that you know how everyone works.

MG: The band will celebrate its 20th anniversary in 2021. Do you think there will be something special to celebrate this? Did you already talk to Morten about this?

Emmanuelle: No, to be honest, we didn’t talk about that yet. Probably we will soon.

MG: So, for now, there is nothing in preparation.

Emmanuelle: No, not yet. Not as far as I know.

MG: We’re coming close to an end. You’ve mentioned some solo stuff previously. How is it going?

Emmanuelle: It’s good and great. I did a lot of collaborations with different styles of music. Jazz music, rock music, rap music two years ago.

Emmanuelle: Yes, I did it [laughs]. Some classical voices in a collaboration with French artists. And very recently I did a collaboration with a singer and guitar player from East Europe. His name is NesKoH and we did a single that went out last September. It is on Youtube. So it is going good. I love to do different things and find inspiration in different kinds of music. It’s this kind of challenges I like a lot.

MG: Ok, last question. I’ve heard that Sirenia had some trouble with the last album. A company went bankrupt and that you couldn’t send out the rewards to the fans who took part in the crowdfunding. Could these problems be solved?

Emmanuelle: I think it’s not totally sorted out yet, unfortunately. It was a really bad thing. We were really really sad about this because a lot of fans made the effort to help us and that was so fantastic from them. Yes, it was not a good experience, to be honest. I don’t know how it is exactly right now. Very complicated.

MG: Ok, so we’ve come to an end. Thank you for your precious time.

Keep in touch with Sirenia