August 22, Russian metallers Be Under Arms were shooting a music video for a brand new track “The Blood Oath”. I was invited to capture some behind the scene footage and spent the whole day with the shooting crew and the band. Read all about it below.

The band chose the abandoned army training ground as the shooting location for this military-style video. The roadies and I arrived by 8 a.m. and started preparing the camp and setting up the equipment. The actors (post-apocalyptic team Poslevas) came by noon. As soon as they changed into uniforms complemented by different armour in post-apocalyptic style and fake weapons like guns, assault rifles and shotguns, the shooting began.

The operators claimed that filming outdoors was the hardest because of the hot weather and dynamic scenes, some of them captured from the drone. For this music video, the band needed a lot of smoke. And this turned out to be a huge problem because all the smoke disappeared almost right after it was produced. All the windows and the doors in the hangar were broken, and the smoke was coming out very easily. The band and the crew were trying to solve this issue throughout the whole day, but it turned out fruitless, and they ran out of smoke bombs real quick.

Since the band’s guitar player Stas was already present as he was in charge of the shooting crew, it was up to the vocalist Anna and the rest of the band to show up at 6 p.m.  Right after their arrival, we had a late lunch break, which, of course, cheered us up and gave us the strength to keep shooting. However, the filming of the band members begun only at 8 p.m. after all the scenes with the actors were done.

The band did a good job. They had to wait several hours until the beginning of the filming, but in action, they still looked fresh. There were about 5-6 takes of the whole band and about 2-3 close-ups of each band member.  Approximately at 11 p.m., the shooting was done. Everyone was extremely tired, yet we still had to pack. Some of the guys even fell asleep. No wonder, we were leaving the training ground by 2 p.m.

Without a doubt, it’s difficult to make a music video, especially with a lot of actors in it. As for me, I was exhausted by the end of the day. But it was definitely worth it; this was such a unique experience! I’m glad I had an opportunity to witness and capture the shooting process for you. Check out my photos below: 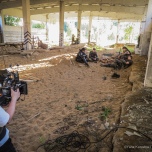 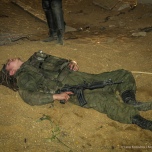 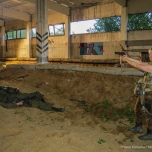 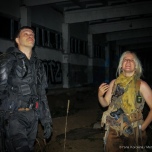