At least since the album „Dance with the Devil“ (2020), which reached remarkable chart positions in the German-speaking area, the Swiss heavy metal ladies Burning Witches can be easily described as an established act. There was a brief moment of fright when guitarist Sonia Anubis left the band and had to be replaced by Larissa Ernst, but with the release of the fourth work „The Witch of the North“ in May 2021, it was impressively proven that the change of lineup had no negative effects, on the contrary.

The extraordinary done and detailed cover artwork by the renowned Claudio Bergamin already gives a foretaste of what awaits the listener: classic heavy metal in the style of pioneering icons like Iron Maiden or Judas Priest, refined with a good pinch of power metal influences. As the cover artwork and the title track suggest, the album is mainly about Nordic mythology and the goddess Freya. The songs appear to be mature, excitingly told and have something more epic about them than it was in the case of the previous album.

Embedded in an interesting intro and outro, „The Witch of the North“ contains straightforward old school metal, shrouded in a modern guise. The classic influences cannot be denied, but in my opinion that is precisely what makes up a large part of the fascination of the Witches. Especially since it is not easy to move in well-tried areas without falling into the trap of pure copying. In any case, the album is a skilful mixture of characteristic metal elements and catchy melodies. No major experiments were carried out, but this is not detrimental to the music quality. With heavy riffs, technically demanding solos, precise drumming and Laura Guldemond’s „dirty“ vocals and screams, the album is convincing all along the line. It is clear that the girls undoubtedly have mastered their jobs.

The album includes 14 songs (total running time: 61 minutes), but it’s not easy to lift out individual songs, because the musical consistency is quite dense. Anyway, I definitely recommend the title track, that reminds me of some Judas Priest stuff. I like these fluently played guitar lines very much, but also the martial atmosphere of the song, especially „Fall, fall of the tyrants! Make them pay!“ part. Well done, ladies!

No less worth mentioning is the catchy hymn „We Stand as One“, that Manowar couldn’t have done better. „Flight Of The Valkyries“ is in my opinion one of the album’s highlights. It starts out with an atmospheric solo, then increases in terms of speed and aggressiveness. The driving beat should leave no metalhead unimpressed. „The Circle of Five“ is another awesome song that seems to have been inspired by Priest’s legendary „Painkiller“. Laura even sounds like Rob Halford in places – definitely a song that remains in mind.

Further tips to play are definitely the atmospheric ballad „Lady of the Woods“, the fast-paced and melodic „Thrall“ and „Nine Worlds“, that again, reminds me of Judas Priest. Really weak songs are not to be found anyway. Not to forget is the bonus track „Hall of the Mountain King“, a remake of the Savatage-classic from 1987. The song is implemented impressively in a straight power metal style and appears to be no way inferior to the original – which is certainly not easy to achieve. A grand finale of an excellent album, which also knows how to convince with its powerful and clear sound. Good work has also been done here.

Not only for those who like girl power based classic metal, the album is highly recommended. Top ten chart positions in Switzerland, UK, USA and even # 1 in the German Metal Rock Charts speak for themselves. All this can’t be wrong and is confirmed by a creative songwriting and attention to musical details. Of course, the Witches are not reinventing heavy metal, but surely „The Witch of the North“ will leave a huge footprint. I claim that this album is a must when it comes to the best metal releases of 2021. 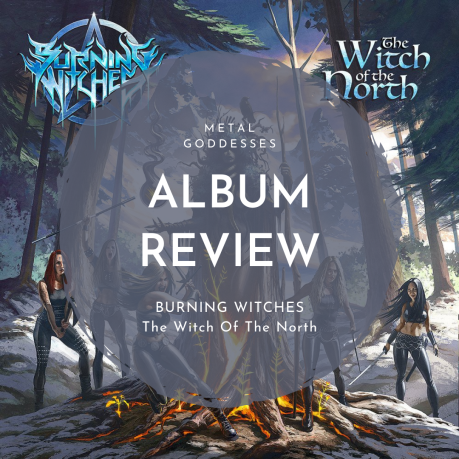