Blind Revision is about to hit the road. The Rhode Island/Massachusetts based heavy rock/heavy metal band told us that they are going to visit some cities on the East Coast of the U.S. to play some songs very soon. Jen Janet and her band also provided some information about them for those who haven’t heard about Blind Revision.

Blind Revision is a female fronted rock band whose draws influences from Coheed and Cambria, Evanescence, Nightwish and Scale the Summit. The band has also shared the stage with national and international acts such as Red Jumpsuit Apparatus, Motionless in White, The Amity Affliction, Miss May I, Devildriver, Hawthorne Heights and many more. 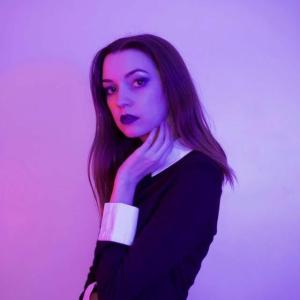 The breathtakingly gorgeous singer, keyboardist and model Jen Janet who is the frontwoman of Blind Revision. She was also featured on Metal Goddesses Media Association’s Instagram page several times.

In May 2017, the band released their second EP Of White And Grey, a concept album exploring inner demons and the human brain. The EP received exceptional reviews, including articles published in Lemonade Magazine, Dark City Interviews, Original Rock, Dead Rhetoric and Northeast Rock Review. Blind Revision was also featured in an exclusive interview and photoshoot for Sopor Magazine’s July 2017 issue.
In April 2017, Blind Revision was nominated for two Worcester Music Awards: best rock act and best hardcore act. Blind Revision has performed at notable festivals such as the Rock and Shock in Worcester Massachusetts, the Goddesses of Rock Festival in Rhode Island, and the 2017 Connecticut Metal Festival.

Jen Janet (vocals/keys) has also been interviewed by Celeb Mix. She is a published model and frequently does runway modeling for designers such as Nathalia JMag from season 15 of Project Runway, and promotional modeling for brands such as Bacardi, Hood Milk, and many others. She is also an accomplished pop songwriter, and two of her songs have been licensed in Korea and Turkey.

This spring, the band is embarking on an east coast tour of the U.S. This is one you don’t want to miss:

Find Blid Revision on the web: