Japanese all female heavy metal band Lovebites presents a music video for “Rising”, the single taken from their upcoming album “Clockwork Immortality”. It can be seen below.

Lovebites was founded in 2016 and consists of Asami (lead vocals), Miho (bass), Haruna (drums), Midori (guitars) and Miyako (guitars, keyboards). Influenced by many great heavy metal bands, Lovebites debuted with “The Lovebites” EP in May 2017. Their first full-length first full album “Awakening From Abyss” came out in October 2017. In June 2018, the band won the Best New Band award at the Metal Hammer Golden Gods Awards and became the very first Japanese band in the world with such achievement. They released their second EP “Battle Against Damnation” the same month.

“Rising” is featured on the band’s sophomore album “Clockwork Immortality”, which will be out on December 7 via Arising Empire. “Clockwork Immortality features the strongest, most powerful elements of our second EP Battle Against Damnation with the speedy and melodic elements of our debut album Awakening from Abyss. This is the evolution of LOVEBITES so far, I would be happy if you can feel the power overflowing from each song,” states leader and bassist Miho. You can see the cover and tracklist below. 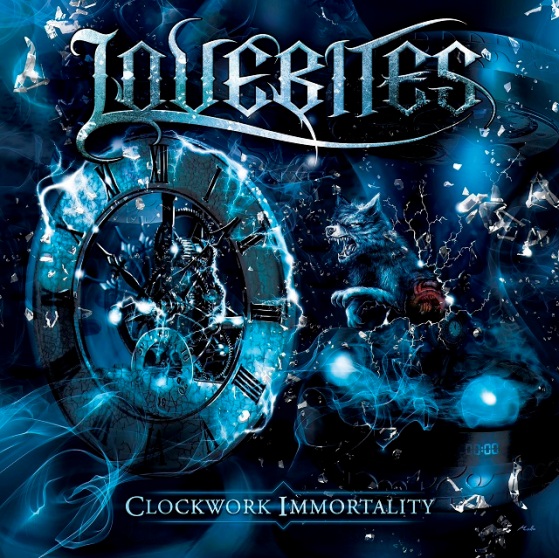 The guitarist and keyboardist Miyako comments on the new single: “One of the key sections to “Rising” is a piano and vocal part in the middle, I used this piece to pay my respects to Chopin. If you listen carefully you may be able to notice it. I believe this song will be one of LOVEBITES’ defining tracks.”