“Smog of Tomorrow is the darker side of mankind and therefore ourselves.”- Interview with Erika Strečková of Symfobia

Hailing from small Central European country Slovakia, symphonic metal band Symfobia is one of the most prominent acts of the local heavy scene. They have shared the stage with names such as Nightwish, Therion and Arch Enemy, and were confirmed to play Ronnie Dio Stage at this year’s edition of the legendary Masters Of Rock festival along Within Temptation, Amaranthe, Delain and others. We got in touch with Erika Strečková, one of the two female vocalists of Symfobia, to discuss their new album “Smog Of Tomorrow” that dropped earlier this month, recent line-up changes, touring and other stuff. Read the full interview with Erika below. 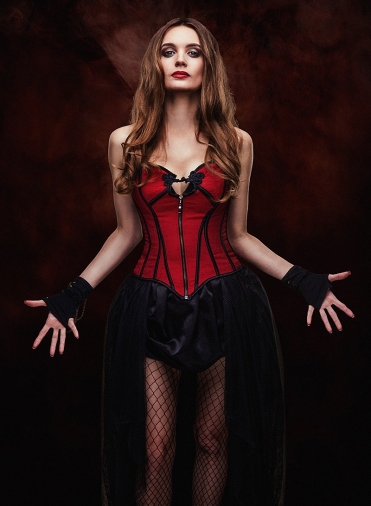 MG: Erika, thanks for your time. The past few months must have been hard and busy for you and Symfobia. You have finished your new album and changed a vocalist recently. How are you doing?

Erika: I’m doing great, thank you. Yes, there has been a lot going on lately. As you said, we just released our new CD,  and we are on tour with NoControl band around Slovak clubs until June. In spare time, we work on our new merch and we are making all the necessary preparations prior to the shooting of a new video clip.

MG: Let’s talk about the recent line-up changes first. Originally, you were the only singer of Symfobia until Petra joined as the second vocalist in 2017. Earlier this year, she decided to leave, and the band had to decide the next step. Did you consider staying the only vocalist of the band as it was at the beginning? Or did you know straight away that you needed to find a new voice?

Erika: Despite “Way of the Queen” being written for one voice only, we use a lot of choirs to enhance monumentality of songs. For this reason, we always had one, occasionally more than one vocalist accompanying us on concerts. After some time, Petra became the second singer in the band and also the official member of the band. Our second album “Smog of Tomorrow” is written for two voices, so after Petra left our band, we knew we needed a new singer.

MG: Your new partner in crime is Simona Janovičová from Sinners Moon. I’ve heard she wasn’t really interested in joining Symfobia at first, but you managed to change her mind. How did you persuade her? How well do you know each other?

Erika: We have known each other since our studies at the university, we even majored in the same field, but Sima 2 years earlier. We hadn’t seen each other for years, but we both had a symphonic metal band so we knew about each other. When we were looking for a new singer, Sima was an obvious choice. I explained to her our situation and a few days later we talked about her joining Symfobia. Sima told me she was thinking about giving up on singing but that would be a pity. I used all my weapons to convince her. And I succeeded 😀

MG: You worked really hard on your new album „Smog Of Tomorrow“. Did the line-up change affect the album release in any way? Who can we hear accompanying you on the album?

Erika: No, the change of the line-up didn’t affect the release of our new album. Petra left the band in December last year and our album was already recorded at that time. We even knew the day of release. Yeah, a lot of people participated on our new album again. To name some of them: choir band Echo, painter Svetozár Košický who has made a booklet of our CD, great team from Randal Group recording studio, Jimi Cimbala, Peter Vlčko, etc.

MG: „Smog Of Tomorrow“ is a very dark album title just like its cover and the lyrical themes on it. What is the main message you want to deliver? Who writes the lyrics?

Erika: On our new album, we are mainly dealing with current issues. On the first album, we dealt with the problems of the individual, the behavior of man, the moral values and the outcomes of his behavior, the good but also the bad. While on the second album we are dealing with more global issues such as technology dependence, consumer society, loss of critical thinking, environmental misconduct, etc. “Smog of Tomorrow” is the darker side of mankind and therefore ourselves. I must praise our writer Rastislav Getta who writes our lyrics in English. We always discuss each text together but he is the one who comes up with the theme. I’m very glad we have him.

MG: I have to say that I’ve always been enchanted by your band name. It sounds really cool, but there’s a slightly negative undertone to the second part of the name. I guess you don’t really have a phobia of symphonic music 🙂 So, how are we supposed to understand this wordplay?

Erika: There isn’t a big story to it. It’ a pure satirical antagonism. It’s always a surprise for those who don’t know us and have different expectations from our music just from seeing the name of the band.

MG: In July, you’ll be playing at the legendary Masters Of Rock festival. You’ve performed at MOR before, but this will be your first time at the main Ronnie James Dio stage. How does it feel? Are you excited?

Erika: Yeah, we played at Masters of Rock festival twice already, but now it will be our first time on the main stage. MOR is always a highlight of the festival season for us, the crowd there is unbelievable. How many festivals are there taking place in the heart of a distillery anyways? It’s definitely one of the best festivals in the region. We are very excited to be on the stage with the world’s biggest stars. So we really appreciate it.

MG: I’m sure you get a lot of requests from your foreign fans. Where can they get your new album? Any plans for shows outside Slovakia/Czech Republic in the near future?

Erika: We have already received orders from Japan, Argentina, Canada, USA, Austria or France…. and we are very pleased to have received only positive reviews on our new album, usually in range 8-10 out of 10 which caused total blast in our inboxes, so guys we are very sorry for our late replies. You can buy the album from our exclusive reseller in Slovakia – CD Andante – just write to Tomi: tomi_andante@stonline.sk. Or on traditional music servers: Amazon, iTunes, Spotify, etc.

In terms of shows outside Slovakia/Czech Republic. Hopefully, we announce some soon. We almost toured in Germany this year but as we are all working people, it’s extremely difficult for us to go on a foreign tour for a couple of weeks. We are planning our autumn tour in the Czech Republic though, so fingers crossed. We are also working on concerts in the Netherlands and Austria, nothing to confirm yet though.

MG: Erika, thank you for the chat. Any last words for your fans and our readers?

Erika: Live in love for yourself, for others, and for good music. Thank you very much for the interview.

YOU CAN STAY IN TOUCH WITH ERIKA / SYMFOBIA HERE: