Debut albums are always something special, both for the protagonists and for the fan base. Looking back in history, there have been legendary and pioneering ones, just think of Metallica’s „Kill ’Em All“, „Appetite for Destruction“ by the Gunners or the debut of the same name by Iron Maiden. Whether „Echoes Of The Soul“ by the Brazilian/Dutch all female Death Metal band Crypta may someday be mentioned in the same breath as those famous works, remains to be seen. After all, also the great bands started out small.

Crypta was founded in 2019 and consists of the two ex-Nervosa members Fernanda Lira (vocals, bass) and Luana Dametto (drums), as well as the two guitarists Sonia Anubis (ex-Burning Witches, Cobra Spell) and Tainá Bergamaschi (ex-Hagbard). After the release of three singles in advance, it was already clear where the journey was headed: Thrash metal in the style of Nervosa with clear death metal influences. The music is characterized by high speed, dominating guitar lines and, of course, the voice of singer Fernanda Lira, who continues with her brutal vocals where she left off with Nervosa.

In any case, „Echoes Of The Soul“ hardly allows compromises. After the short and mysterious „Awakening“, the album is opened by „Starvation“, which already gives the direction: over a length of four minutes it runs ultra-fast with precise guitar work, garnished with Fernanda’s guttural singing skills. Well done, ladies! The next song „Possessed“ offers once again a solid piece of extreme metal with remarkable solos and bursting joy in playing. Especially Sonia Anubis brings in some heavy metal influence to the guitar sound of Crypta from her work for the Burning Witches. In my humble opinion, she may be called one of the top female metal shredders, even though the competition is really strong in this genre.

The album continues with „Death Arcana“. Fernanda roars like a lion in places and the guitar work is truly outstanding. Just listen to that awesome solo at 02:41, it’s an ears’ pleasure! And it goes on blow to blow: „Shadow Within“ is a melodic song that leaves nothing to be desired in terms of heaviness and speed. For me, the vocal performance is one of the best that the album has to offer. Also Fernanda’s bass playing is clearly audible and gives the song a special flair.

„Under the Black Wings“ starts out interesting and is not as fast as other songs on the album. Still melodic and with a fine guitar part that is worth listening to, but compared to other songs, „Under the Black Wings“ seems to lose a bit of quality. But that’s not a problem, because with the next song „Kali“, it goes on as usual; quickly and aggressively. The riffs go straight to the ears, also the good drumming should be mentioned. Great solos complete the whole thing. Chapeau!

Also the eighth song „Blood Stained Heritage“ is worth mentioning, which is not only due to Fernanda’s nasty sounding voice. Again, it is fast-paced, but also melodic to the point. With „Dark Night of the Soul“, a gear is downshifted. After a slow start, the song increases. The vocal performance should be emphasized, as well as the good guitar work again. Analogous to the beginning, the song ends rather calmly, which I like very much.

The finisher is „From the Ashes“, which was released in advance as a single and music video. Anyone who likes this type of music will find real pleasure here. Including a driving beat, melodic riffs and fine solos, the song knows how to convince. I guess that selecting this song as a single wasn’t the worst idea.

After all that, I heard a good quality album that is musically typical for the genre, straightforward and without major experiments. Comparing with works by established bands,  Crypta and „Echoes Of The Soul“ do not have to shy away. I am inclined to describe the debut of Crypta as a successful one, because the album convinces with uncompromising extreme metal and its musical unity, so that the 42 minutes of playing time fly by without boredom. For me personally, the type of singing appears exhausting at some point, but of course, that won’t bother die hard fans. In any case, I give a clear recommendation for Crypta’s first performance, and I am sure that we will hear a lot more from this talented band. 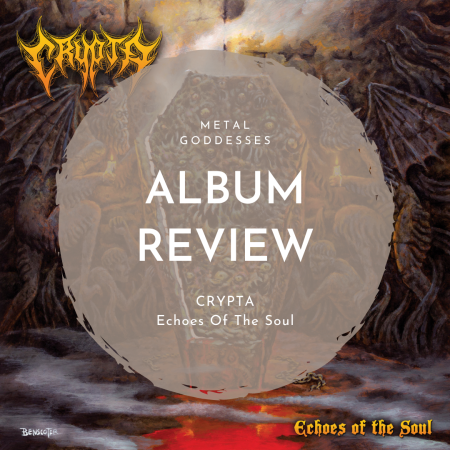