Seven Spires release their brand new music video for “Succumb” from the upcoming album “Emerald Seas” which will be out in 2020.

Fast, epic and melodic “Succumb” includes some violin parts and the video is a mix of scenes of musicians playing and maritime scenery. All the members of the band are dressed in the 18th-century style, complementing the song’s concept.

“Succumb” was written in the heart of Boston while we were still attending Berklee”, says frontwoman Adrienne Cowan. “As many of our songs do, it began as vocals and piano, and then we flashed out the rest of the arrangement together. I suppose everyone has their own experiences and hopefully will interpret the lyrics to the song in their own way, but in the story of “Emerald Seas” the main character has departed in their long journey and is indulging in memories of someone quite special instead of focusing on their quest. It’s a bittersweet one… But aren’t they all? :)”

“Emerald Seas” is a theatrical concept album, and is the prequel to the story of their debut full-length “Solveig”. The album follows a lone sea captain on their quest for eternal life while being hunted by an ancient beast and struggling with loneliness, sacrifice, alcoholism, and the unexpected weight that comes with achieving one’s goals. Seven Spires’ signature blend of melancholic beauty and emotional brutality on “Emerald Seas” is the sonic manifestation of the silent emptiness that chills one’s insides when staring across bleak, open waters. The album comes out on February 14th via Frontiers Records. 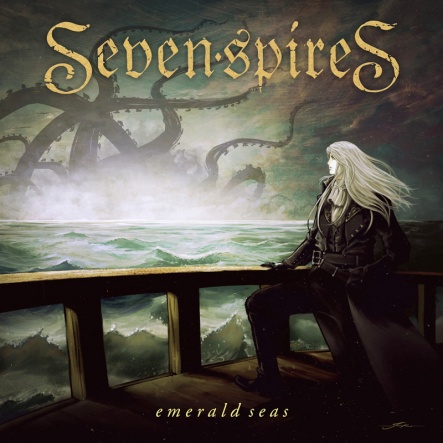 1. Igne Defendit
2. Ghost Of A Dream
3. No Words Exchanged
4. Every Crest
5. Unmapped Darkness
6. Succumb
7. Drowner Of Worlds
8. Silvery Moon
9. Bury You
10. Fearless
11. With Love From The Other Side
12. The Trouble With Eternal Life
13. Emerald Seas Overture